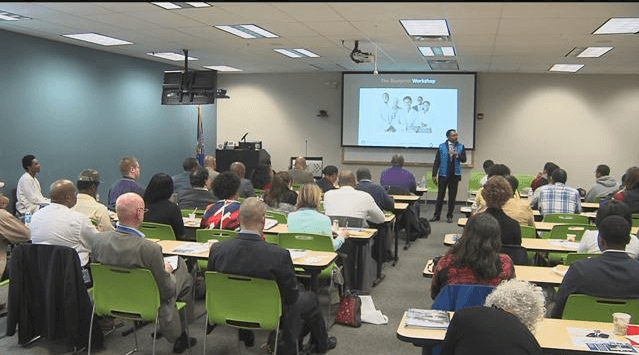 Local leaders in Milwaukee came together at the beginning of May, 2016 to offer a workshop called “Don’t Take a Job. Make a Job” — designed to help ex offenders become entrepreneurs.

Washington’s program at Pro Trade Development is so much more than a construction training school. He aims to help his students develop a high level of professionalism, in addition to trade skills in the construction industry. Before students can enter their trade, they’re required to complete personal development goals. Over the course of the 10-week program, they learn to write their own goals and be held accountable for their actions.

This training helps students realize what they want to do — and how to get it done.

“Typically when you look for a job, if it says felon, you don’t see anything else,” Washington said. “You see that person as a felon. [After the training in our program], this person is so much more than a felon. He works on a team, he’s a hard worker, he’s accountable, and he follows rules.”

One graduate of the program, Warren Townes, 33, spent seven years in jail. When he was released, he wanted to do something positive with his life. He now owns a painting company, We Paint LLC, and even has four employees.

“You have to be a person who wants to change,” Townes said. “You got to go do it; you got to show it.”

He credits the program for helping him make that change. “It kind of shaped my life in a way,” he said. “On paper I have been out in the world where crime is being committed. Now instead of being that person that’s out there putting something in on that, I’m out here changing things.”

Washington is passionate about helping students like Townes transition from street life to the business world, and he relates to his students — because he’s been there.

“Just because one person has a sketchy background or things like that, they can still help a company grow,” Washington said. “They are still a citizen of our city. They served their time. They do deserve that opportunity if they prove that they are worthy. By completing our program, that says a lot.”

Pro Trade hopes to find 100 employers to hire 100 of his students this year. 92% of Pro Trade’s recent graduates have found employment, and many credit their success to not only the construction skills they gained, but the life skills they were taught while in the program.

Pro Trade’s classes are open to anyone, ex offender or not.

This is just one of the many initiatives Rashaad is involved in that supports his local community. We’re proud to call him a friend!