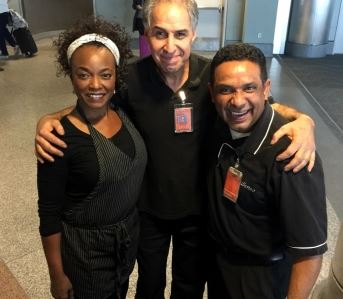 What Would Your Initial Thought Be If Your Child Said,

“I want to be a person who shines shoes for a living”? I don’t know about you, but my first thought (before today) would have been, “Really? Why would you pick a profession that has no real future?” or maybe I wouldn’t say that, but I would think to myself, that might not be the most respectable job you could pick. After meeting Guillermo, Tina and Hassan today, I would say, “Great! If that’s what you want to do, then be the best you can be at it because I know some pretty cool people who do a great job at it!”

I had the opportunity to do four separate speaking engagements for Sherwin Williams conferences to help other painting contractors successfully navigate through best business practices. As I was walking to my gate to depart from the Denver International Airport after a long trip, I noticed my shoes were looking quite beat up. The sudden April snow storm in Denver for the past two days really didn’t help and played a big part in just how dirty my shoes were. So when I passed by the Executive Shine kiosk in the middle of concourse B, Guillermo kindly asked if I would like a shoe shine. I thought, perfect timing, I have about a half hour before I have to board. So I said, “Yeah, how much?” He said, “Oh, just pay me what you want!”

My first reaction (as a service provider) was, “Wait, you can’t do that! What if I don’t pay you what it’s worth?” Everyone has their own idea about how much something is worth and what they are willing to pay for it, and it varies so much between people. So I asked him again before sitting in the chair (where there were already two people getting their shoes shined), “Well, what’s the going rate? I have no idea because I don’t usually get my shoes shined. I’m a painting contractor, not a suit-and-tie guy.” Guillermo just said the same thing, “Pay me whatever you want, my friend.” So, in my mind I’m thinking, “$5 is good. Yeah, that sounds about right. $5.00, that’s good, right?”

As I was sitting there watching him do his thing, I asked him about his job. I was interested in hearing how he learned some of the tricks of the trade I saw him do, like pulling out a blowtorch to shine my shoes (especially with my flammable socks and pants so close by). He told me how he had been doing this for 8 years. He also shared with me how he came here from Columbia to work with his brother in his painting business (of all things!) called Brown Brothers’ Painting. When it was slow in the painting business during the Colorado winters, Guillermo would come to the airport to look for work. He ended up meeting Tina and the owner, Jill Wright, who owns Executive Shine. They showed him how to do it.

I looked to my left and saw a woman (Tina) working on an older gentleman’s shoes who was talking to her about his travels and why his wife wasn’t with him this trip. They seemed to really know each other. So I asked Tina how long she had been doing this type of work. She said, “20 years and I love it!” She went on to explain that she fell into the profession the same way. She would come down to the airport. She said that was before they had security. She and her friends would hang out (even at the gates.) “It didn’t matter because we didn’t have all these security issues back then,” she explained.

Then the gentleman that she was attending to said to me, “You know, that trick that Guillermo used with the blowtorch is an old military trick!” At this point I was fascinated. So I asked Tina what she liked about it. She said it has provided a good income for her and her 15-year-old son. She went on to tell me that she is a single parent and that shining shoes has even provided her with the ability to get a second college degree and that she is currently getting her master’s in communication. She also told me how she is an assistant editor of an online digital magazine called CCD’s “The Star” that showcases excellence in journalism, design and photography.

At that point the gentleman got up and paid Tina $20 for her services and left. When I saw that, I was like “Wow!” That was four times what I initially thought a shoe shine was worth, but after talking with them and seeing what they do, it seemed just about right to me.

Oh, and after Hassan (the guy in the middle of the picture) had finished with his customer on the other side, he came over and just watched and listened. I asked him how long he had been doing it. He said, “Only a year.” I asked if he had been learning from them, and he said “Yes.” We then got on a philosophical topic about how we all need to share what we know! Much like when I go around sharing with painting contractors all around the country. I love to do this because others have come alongside of me and shared with me. We talked about living in a country that is full of opportunity. Hassan went on to tell me that he came from Morocco and has two jobs that keep him busy 7 days a week and they are both at the airport. He is a manager/supervisor of a catering company there in the morning and shoe shiner in the afternoon. He said his real passion, though, is buying homes. He now has four houses that he rents out.

After paying Guillermo $20, I left there not only with my shoes looking ALLBRIGHT, but with a newfound respect for the American Dream and the people who shine shoes for a living.

The 5 Things That I Learned:

1. I learned that you (and me) shouldn’t judge a book by its cover.

2. I learned that you can break the norm with payment for services performed. I realized that I might not have gotten my shoes shined if I had seen a price of $12 or $15 beforehand because of my internal budget. These people understood that time is all they are really selling, much like what I teach all around the country. So if they can get people to sit down and pay what they feel is correct, they haven’t lost that time to all the people, like me, who may not have sat down otherwise. Not only that, but they got paid 4x what I had initially thought it was worth.

3. I learned to respect all professions because you never know just how successful one is.

4. I learned that even I had a prejudice around the profession of shoe shining. This is weird coming from a person who chose a profession like painting, which is often looked upon as the low level-trade in the home improvement field. People think anyone can pick up a brush and a roller and call themselves a painter. We know that’s not true, but I often wonder what people think when I tell them what I do for a living.

5. I learned that no matter what the work is, hard work pays off and can give a person a great sense of pride and accomplishment.

I was reminded of that feeling that people must have when we at ALLBRIGHT take something of theirs that looks old and worn and make it look new again with a fresh coat of paint. I couldn’t believe how good my old pair of black Clarks “Deane” Loafers looked.

I love being able to have these opportunities in life to learn from all types of people on my travels. It sure makes life interesting and gives me a sense of #paintinghappiness.