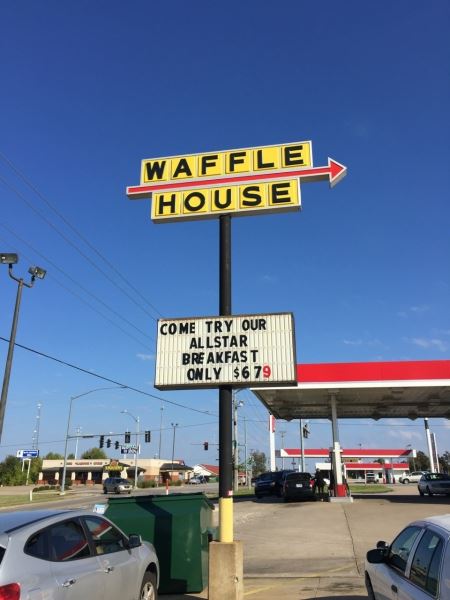 As a featured speaker for Sherwin-Williams Paint Company residential repaint conferences, I get to visit all kinds of places across the country.  I find myself wanting to try some of the local favorite restaurants to the area.  Today, I decided to skip the hotel buffet breakfast offerings and take a short walk over to the Waffle House that I could see from out my hotel window. I had a lot of choices, mind you. I had to walk through the Sonic parking lot to get there, but I was surrounded by McDonald’s, Denny’s, and Wendy’s all competing for my breakfast business. I chose the Waffle House because they don’t have them in Los Angeles, and I’m glad I did.

I sat at the counter like any good single traveler would. As I sat there, I was amazed at the amount of business they do and how they only have one cook who is taking orders from three servers all yelling out their orders. If you’ve never been to a Waffle House before, the servers (they call them Salespersons) write down your order on these little yellow ticket order forms, but they don’t hand that ticket to the cook for review or to refer to. They just call it out loud and have a little fun with it. If you’ve been before, you know what I mean.  I thought, “How in the world does this one cook remember all these orders?”  So I asked my salesperson Mariana how he does it.  She explained that they have all these little plating tricks. Who knew?  When they call out an order, the cook will set out the plate that he will be adding the food to and he places things on the plate in a certain way that tells him the order.  It’s pretty incredible when you think about it.  I would think there are a ton of combinations of food that one could order off their menu. For example, if a customer orders fried eggs, the cook will place a little jelly packet in the middle of the plate, and if a customer orders an omelet, he will stand the jelly packet up so that it’s vertical.  Then it depends on where he places the jelly packet on the plate to signal how well it should be cooked. Amazing!  I ordered the 2 eggs for $6.10 breakfast, smothered and chunked.  That’s Waffle House lingo.  Yeah, I’m in the know…and I added a waffle with peanut butter morsels mixed in to it.  Everything I ordered came out and it was all right.  The system worked.

The next thing that caught my attention was the mini job application next to me at the counter.  I see that they pay weekly, but what really caught my eye is they pay “in cash”!  What?  Who does that these days?  So I asked my salesperson how that works. She explained they get paid weekly in cash and their hourly wage is $2.63. What?  Really!  I wonder if Mariana saw the surprise on my face.  She went on to say that she makes most of her money on tips.  So I asked her if she liked working here.   She said she did.  She went on to tell me how she has two jobs – the Waffle House and Walmart – but that it’s hard when she works the first shift at the Waffle House from 7A – 2P then over to Walmart until 10P.  I sympathized with her – that’s hard.  I told her I understood.  It was then when Donna came over to tell me how much she liked working there too, but what she said next blew me away.  She said they really take care of their employees.  I’m thinking, “Really?  $2.63 an hr?” but Donna was not kidding.  She was very enthusiastic about working there and very grateful for the way they treat her and her fellow coworkers.  Donna said, “It’s like family working here” …and it’s true, they are like family there.  In fact, Jessica (another salesperson) who has been there the longest (since 2008) trained her brother Wesley and now he’s the cook.  Both Mariana and Donna said they either have family that works there or their family encouraged them to get a job there.  So everyone there was connected.  I noticed this family thing even more when customers would walk in and they (the salespersons) would already know most of the orders of the people before they sat down. I found out that most of the people in there were regulars and some of them were two and three times daily regulars.  That seems like family to me.

I asked Donna if she wanted to grow into a manager or other positions and she said, “Not really.”  She like serving and she didn’t think she could be the cook and remember all those plating combinations. Another thing I learned is that the cook is the manager.  He is the one in charge and is responsible for almost everything.  They do work hard.  Jessica told me how they even have to sometimes cover 3 or 4 shifts (fyi – 3 shifts = 24 hrs straight) if they can’t get someone to cover a shift, and Jessica said it happens sometimes, especially during an ice storm.

1. I was especially taken aback when I found out the cook is the boss. That’s turning the status quo upside down to me. I’ve always thought a short-order cook was the beginning position and here it’s the top position.  It made me want to look at ALLBRIGHT’s systems and see if there is something that we have always done and see it from a different perspective.  Is there something that we could do differently?  Can we flip a system upside down and see if there is a better way?  Maybe have apprentices do something that is unexpected?

2. The same thing with not handing over the ticket order to the cook, but rather coming up with plating combinations and a system that helps them remember.  To me, that’s fun. This is breaking the rules that every other coffee shop and server-to-cook uses.   I love that the Waffle House does it this way.  What systems could ALLBRIGHT come up with that would accomplish the same thing but in a fun and creative way?  I’m going to propose this at my next all-employee meeting and see what we come up with.

3. Lastly, but not the least important, I learned that it doesn’t matter the amount of pay that determines one’s happiness at work.  Sometimes, it’s more than that. This was being spoken loud and clear here. When you work together like family, you can overcome a lot of obstacles.  That culture has been developed here at this Waffle House:  “We are family and we’ve got to work together.”  It was so nice, as a customer, to hear that everyone there is happy.  They like what they do.  It makes for a nice customer experience, too.  I wish the same for our employees and customers.  In fact, when I wrote my first business plan back in 2006, I was challenged to start it with a vision as to what ALLBRIGHT will be known for, and this is what I wrote: “ALLBRIGHT will be known both locally and nationally as a company for its professionalism, for its systems, and for giving back to its local community and for giving back to the painting trade itself.  ALLBRIGHT will also be known for how it treats its employees, as well as its customers.  We will be the best painting company to work for.”  This was how I envisioned it over 9 years ago before anyone really knew who we were.  I’m happy to report it’s all coming true.  I had no idea how much #paintinghappiness would mean to me and the ALLBRIGHT culture, but it embodies us perfectly.  Thank you, Todd Smith, for suggesting it to me way back when.

I have to admit I’ve had some prejudices around Waffle Houses, but I’ve got to tell you, that’s been flipped upside down and I see them in a whole new light.  All it took was spending a few minutes getting to know them.

Thank you for reading this all the way through. I hope you have an ALLBRIGHT Day! (Thank you, Richie Sadler, for that line.)